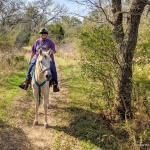 Deb has been making making equine Rhythm Beads and will create custom designs to match your tack.
www.rhythmbeadsforsteeds.com

Deb often takes video documentation of her trail rides which can be viewed here: “debdemer” on YouTube 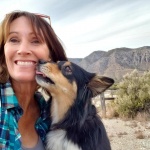 Shannon has been riding for 20 years and lives in central Texas (as a native Texan) with her three horses Drago, Keeper and Dex, Pancho the donkey and Kona a mini-Aussie. Now an empty nester, Shannon is currently focused on traveling around Texas, New Mexico and Colorado riding state parks and national areas as much as possible…. and living her best life!

You can read more of Shannon’s experiences on FaceBoook at Confessions of a Saddle Tramp. 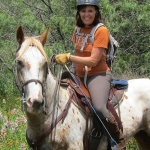 Carol Grosvenor lives in Dripping Springs, a small town 25 miles SW of Austin. She began riding as a young adult and parent showing in hunters and dressage, foxhunting, trail riding. She spent a decade as
a Pony Club parent, which included hosting summer camps and clinics,
serving as newsletter editor and webmaster, being the regional
foxhunting coordinator, training kids for KnowDown (now Quiz), and
attending rallies and clinics. She became interested in endurance
riding in 2009, and currently serves on the board of the Texas
Endurance Riders Association (https://tx-riders.org). She owns two
appaloosas, and runs a horse motel called Cedar Grove Stables (link to
https://www.cedargrovetx.com). 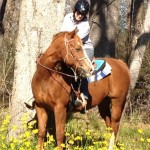 Ann Sides, WTTA’s newest contributor, lives near Greenville, TX with five horses, three dogs and her husband, J.Paul, who is head of security and composting. Ann works at L-3 in Greenville and hopes to retire in a couple of years. But until then she’ll keep riding and camping every weekend she gets the chance. She and J.Paul have one daughter, Lauren, son-in-law Clint, and one adorable grandchild, Ryan Moore, who live close by in Royse City. It doesn’t get any better than this!!! 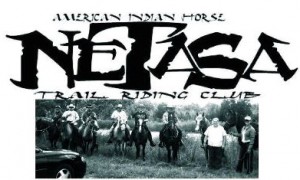 Northeast Texas And Surrounding Areas is an American Indian Horse Registry riding club based out of Tyler, TX. Their goal is to promote America’s first horse, the Spanish Mustang. NETASA’s trail rides are open to the public and provide a non competitive and relaxed environment. NETASA also strives to provide educational opportunities to their members on the most modern and cutting edge equine health and training management techniques. 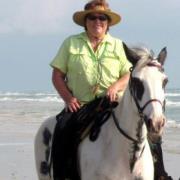 Lin Sutherland is a rider and travel writer specializing in horse adventure. She has written for Field and Stream, American Cowboy, Range Magazine, Trail Rider, Horse Talk, Horseback Magazine and many others. She lives the Hill Country of San Marcos, TX.

Lin has contributed an article on the following locations: 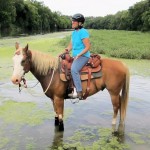 Tonja has been a teacher for 20 years and her husband trains horses, checkout their website: www.tdavis123.net
Tonja Davis has contributed some information on beach riding locations which is in the works and photos on the following location:
Ebenezar Park, Jasper, TX

Tracy is a member of The Trinity Trail Preservation Association (www.trinitytrailriders.org), a non-profit all-volunteer trail preservation organization. TTPA’s main purpose is to maintain the 25.5 mile long trail on Corps of Engineers land on Lake Lavon and encourage hikers, joggers, nature lovers, photographers, and trail riders to use the scenic trail.

Tracy has contributed a post on the Trinity Trails off of Lake Lavon.

Amy has contributed an article on the following location:
Lake Bardwell, Ennis, TX

Robin writes for the Marshall News Messenger. She kindly gave permission for one of her articles to be re-posted on WTTA! 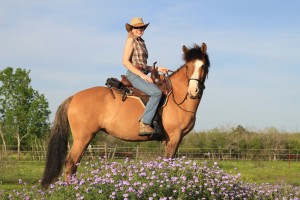 Kelly is the owner and founder of Where The Trails Are. She was born and raised in Texas and around horses. Trail riding is her favorite activity aboard her American Indian Horse/Spanish Mustang, Angel. She and her husband Chris live just north of San Antonio. Kelly’s articles about where to ride have been published in The Horse Gazette and The Trail Rider.